The Australian Kendo Renmei  is very happy to advise that Mr. Toshiaki Tsukadaira, from Nerang in Queensland, successfully met the challenge of a recent kendo exam and was graded to Kendo 7 Dan in  Nagoya, Aichi-ken, Japan on 16 May 2015.

On 17 May, the day after, his wife, Mrs. Hiroko Tsukadaira also successfully met the challenge of Kendo 6 Dan.

Congratulations to both Tsukadaira sensei from all AKR members on your achievements! 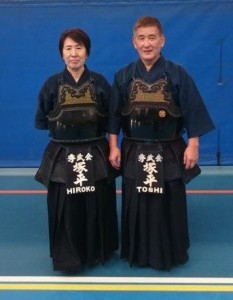